In March of this year, I had an idea for the Nerd Lunch Podcast to discuss pop culture based musicals and within the context of the discussion we would create ideas for other potential musicals based on movies and TV shows. I felt like a topic like this begged for a special themed intro. So I created the “Nerd Lunch: The Musical” opener. I sang for a chunk of it, I enlisted the other podcasters from the show (including guest Klingon Pop Warrior Jen Usellis Mackay) to sing parts and my wife sang all the back up parts and I produced it all into one magnificent opening.

Take a listen to the first couple minutes below for the results and check out the entire show for the full discussion. Lots of creative ideas were shared.

I recently modeled once again for 850 Business Magazine. This was for a story about being tethered to technology and not taking in the world around us. Seems to be something that is weighing on a lot of us right now as we all get sucked into updating and checking our dozens of social media outlets, texts and emails. For this piece, I would be posing in several different ways and they would all be merged together showing my rudeness. It worked great for the final piece.

You can see how the piece looked in the print edition by checking out the Digital Flipbook. And there’s a video that was put together, too. This was edited by Rowland Publishing’s Digital Services Producer Chelsea Moore.

Last year I had the opportunity to have a bit part in a commercial for Awards4U in Tallahassee. I also helped produce the commercial. I play the part of the coach.

END_OF_DOCUMENT_TOKEN_TO_BE_REPLACED

Even though Nerd Lunch: The Web Series wrapped, I didn’t want to give up on the expansion of the Nerd Lunch blog.

The form this took on was an audio podcast featuring one of the other blogging members of Nerd Lunch, the addition of fellow blogger Paxton Holley of the Cavalcade of Awesome, and a “rotating fourth chair” which features guest bloggers and podcasters. The pop culture podcast features the four members of the show doing round table discussions on anything from movies to comics to junk food. The podcast is hosted on Skype, recorded using Skype Recorder for the Mac, and I edit the show every week.

END_OF_DOCUMENT_TOKEN_TO_BE_REPLACED

Episode 3 of “Nerd Lunch: The Web Series” is now on Vimeo.

Savannah and I return for another episode of Nerd Lunch: The Web Series. Of the three that we produced, this is probably my favorite.

In between everything else that’s been going on in my life, here’s my newest project… producing and starring in a web series!

For more on the project check out Nerd Lunch.

I mentioned a few weeks back that I had been in a photo shoot for the cover of 850 Business Magazine. Here are the final results: 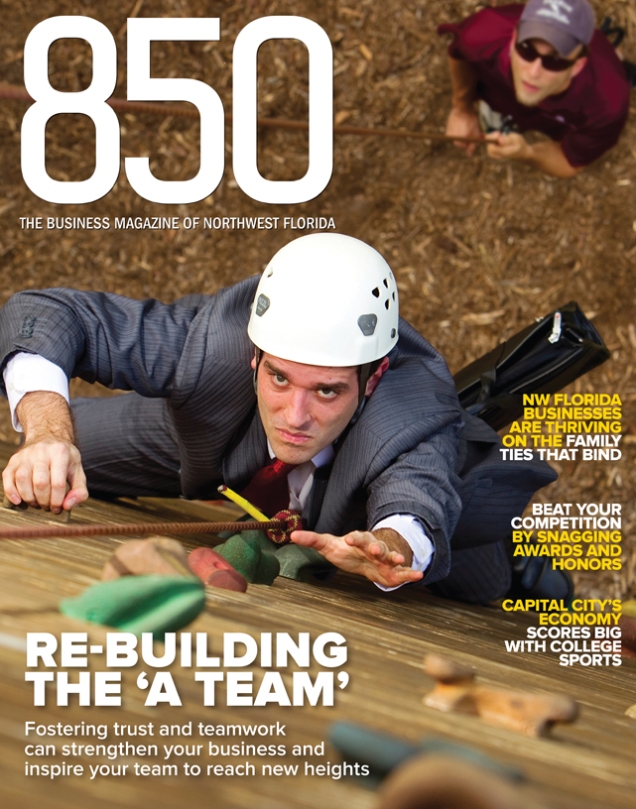 One of the perks of my time spent working at Rowland Publishing was that I occasionally got to model for the various magazines. It was fun, broke up the routine and got me out of the office for a couple hours. Long-time readers of the various Rowland Publishing publications may have recognized me over the years as any number of characters: exasperated husband, upset manager, skeptical friend of vegetarian, and outdoor lawn gamer. And I’ve shared the fun with my family and was able to get my daughter in Tallahassee Magazine twice — one of those times on the cover even!

That’s where my daughter trumped me. For as often as I have appeared in the publications, none of my appearances had been on a cover. And I hadn’t been in 850 — The Business Magazine of Northwest Florida either. So when lead designer Tisha Keller came to me and asked if I would be on the cover of 850, there was only one thing I could say: “I thought you’d never ask.”

END_OF_DOCUMENT_TOKEN_TO_BE_REPLACED

My wife and I each recently purchased an iPhone 4. I really wanted to check out the video these things shoot. Being impressed with a couple projects produced with the iPhone 4 that I’ve seen recently, I felt the need to put together my own project. So, in a 24 hour period, my family and a couple friends put together this seven and a half minute short for my Nerd Lunch blog.

If you’re not a comic book nerd or have never been to a comic book convention, some of the jokes may fall flat for you, but I still thought I’d share it here. It didn’t get a huge response, but it was effective in being something fun the family and some friends could enjoy.

There are things I like about the iPhone 4 footage, but now having used it, I can’t see doing any major projects with it. More fun stuff like this though.

Special thanks to Scott Holstein and John Kimber for swinging by to be actors in the video. And also check out Michael Calienes’ site for more music like the clip I used at the beginning of the video.